Goldman, a New York Times bestselling author and host of Ace of Cakes, a judge on Holiday Baking Championship and Spring Baking Championship, and a star in Duff Takes the Cake, teaches budding young bakers how to make dozens upon dozens of crazy delicious concoctions that will amaze parents, delight friends, and make the whole family go “mmmmmm.”

SUPER GOOD BAKING FOR KIDS features more than 35 of the gooiest, chewiest, easiest-to-follow recipes ever! With kid-friendly step-by-step instructions; helpful kitchen-safety tips; and fun, fact-filled sidebars on everything from the best places to eat in New York to surprising facts about unicorns, this book will give any kid the kitchen confidence to make crazy delicious desserts that everyone will enjoy.

“I’m constantly inspired and amazed by what kids are able to do in the kitchen, so I’m super excited to be releasing my first cookbook for kids,” says Goldman. “My goal with this book is for kids to have fun creating delicious desserts that the whole family will love and empowering young bakers to release their inner artists in the kitchen!” 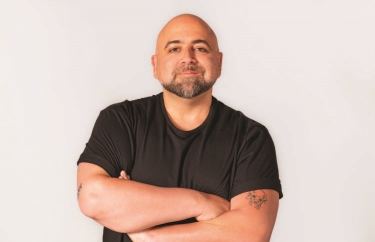 “Duff Goldman has the unique ability to make the impossible possible. His cookies, cupcakes, pies, brownies, bear claws . . . they all seem too good for a beginning baker to be able to make. And yet Duff’s found a way to bring his unique style into recipes that will make any kid an all-star chef,” says HarperCollins Children’s Books Executive Editor David Linker. “It’s been a tremendous pleasure working with him and I know that fans of his shows and families looking for fun activities to do together are going to love this.”

Duff Goldman is a pastry chef and artist who premiered on the hit Food Network show Ace of Cakes, which followed the day-to-day life of his bakery Charm City Cakes.

HarperCollins Children’s Books is one of the leading publishers of children’s and teen books. Respected worldwide for its tradition of publishing quality, award-winning books for young readers, HarperCollins is home to many timeless treasures and bestsellers such as Charlotte’s Web, Goodnight Moon, Where the Sidewalk Ends, Where the Wild Things Are, and The Hate U Give; series including The Chronicles of Narnia, Ramona, Warriors, A Series of Unfortunate Events, Pete the Cat, Fancy Nancy, Divergent, and Red Queen; and graphic and illustrated novels such as Nimona, Invisible Emmie, and New Kid.

4 Great Bakes To Do With Kids Of All Ages

Calling All Bakers and Pastry Chefs! The #FoodNetwork is Casting NOW!

In this new year, be grateful that God has given you victory over many things over the past year. ~Steven M. Hitchcock Dismiss